On May, 20, 1861 the legislative of North Carolina passed a bill for the creation of a State Flag.  Accepted was the proposal of William Jarl Browne.  In his design the flag should contain a vertical red field with a white, five pointed star in center. Above the star there should be the date of the Mecklenburg Declaration, May, 20th, 1775.  Below the star it should be the date of secession, May, 20th, 1861.  Horizontal to the red field the flag had a single blue field (above) and a single white field (below) of the same size.  The length should be 1/3 more than the width.  This flag is commonly referred to as the NC State Secession Flag.

The regimental flags received by the first ten regiments were not completly in this style.  They had different paintings on front and reverse side.  On the frontside there were 3 horizontal painted green, gold framed scrolls with the regiments' designation in the red field.  The  ribbons were enclosed by a golden painted frame.  On the reverse side there was a painted six pointed silver star in center of the red field, above the date of the Mecklenburg Declaration, May 20th, 1775, and the date of secession below, May, 20th, 1861, on green painted  gold framed horizontal scrolls.  Like on the front side, a golden frame enclosed star and scrolls.  The width of the flags were 38 inches, and the length 62 inches.  Length of the red field and width of the blue and white was 19 inches.  The flags were made of silk.  They were given to the regiments in August 1861.
Today 3 flags of this pattern are still existing, the flags of the 2nd, 3rd and 8th North Carolina State Troops.  These flags are identical in design, only the regimental designations are different.  It can be taken as proof that the 1st North Carolina Cavalry received this flag with the designation 9th Reg't  N. Carolina State Troops. The flag was never surrendered to the enemy.  The flag, shown on the picture is now in the North Carolina Museum of History in Raleigh, NC. 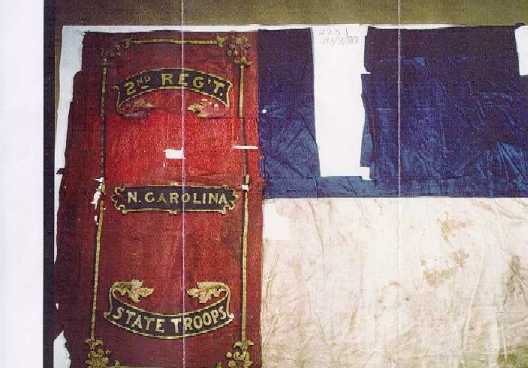 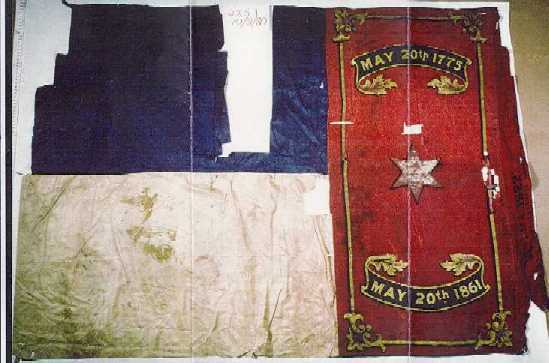 The flag below is a so called "Battleflag".  This flag indicated the affilation to the Confederate States Army.  The flag shows the so called "Southern Cross" with 12 white stars and has a size of 34x34 inches.  The blue bars are 4 inches wide, the white stripes 1 inch.  Remarkable is that the stars are eight pointed, and the designation with a number 1 in center of the flag with N above and respectively C below the number.  Stars and letters/number are 2.5 inches across in size.  Stars and designation are not just simply applied, they are inserted.  The flag is enclosed by an orange frame and completly made of silk.  It is not clear if this is a regimental or a brigade flag.  The flag was founded in the beginning of 1864.  In May 1864 the flag covered the casket of General James B. Gordon.  After the burial the flag was given to his family.  One day many years after the Civil War the flag was discovered in an antique store and is now in a private collection. 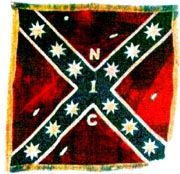 The following flag is listed as headquarter flag of General Rufus Barringer.  After the promotion of James B.Gordon to Brigadier General, Barringer was put into command of the 1st NC Cavalry.  When Gordon was killed, Barringer received his promotion to General and was now in charge of the North Carolina Brigade in the Cavalry Corps of the Army of Northern Virginia.  So this is probably the last flag the 1st NC Cavalry followed into battle.  At least US archives list this flag together with the regiment.
On morning of April, 6, 1865, a small party of federal soldiers, dressed as Confederates, captured General Barringer and his guard.  Together with the General this flag was captured also.
Remarkable is that this flag, although used by cavalry, has with 47x47 inches the size of an Infantry Battle Flag of the Army of Northern Virginia.  The blue cross bars are 5inches wide, the white stripes are 0.5 inches. The flag has 13 white applied five pointed stars on both sides, at 3.25 - 3.5 inches in diameter.  The white frame arround the flag has a width of 2 inches.  The flag is made of so called Bunting, with only the white parts being cotton.  The flag is now in the North Carolina Museum of History in Raleigh, NC. 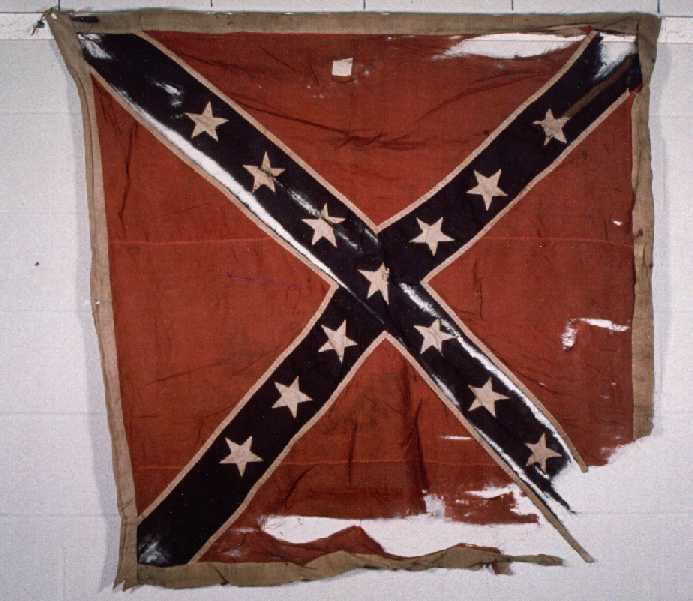 This flag was given to Company F in 1861.  It shows the so called Stars and Bars with 10 stars in a circle arround an eleventh star in the center of the blue field.  In the white field you see the company's nickname, Cabarrus Rangers.  Today the flag is housed in the Old Courthouse Museum in Mt. Pleasant, in Cabarrus County. The flags of the other companies probably had an equal design. 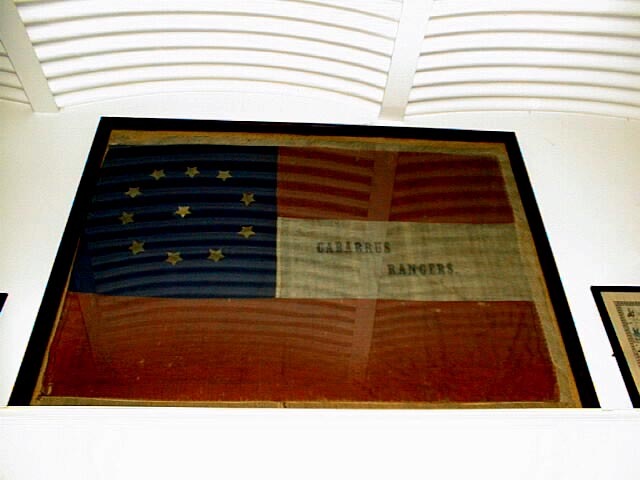